How many Unicorns do you have in your pocket?

Not long ago when we thought of Unicorns we would imagine magical creatures from fairy tales but not anymore, that all changed in 2017. Now when we hear the word, we picture start-ups valued at over 1 billion dollars and which haven´t floated on the stock market yet. Something that was impossible decades ago!

It was Aileen Lee, founder of Cowboy Ventures, who gave name to a new kind of company that was conquering the markets with a breakthrough business model, and in some cases even illegal to current standards. She coined the name in a post on TechCrunch titled “ Welcome to the Unicorn Club: Learning from Billion-Dollar Start-ups”.

At MDirector we want to provide you with up to date information about the companies that are constantly making headlines. And that is why we have created two great infographics under the title “Unicorn companies”, from data published by The CrunchBase Unicorn Leaderboard.

All of the graphics that you see in this post you can take and use on your own website. Don’t worry! We will explain how to do it at the end of this post.

A taxi service that doesn’t own its own fleet of vehicles? A hotel business that doesn’t own any rooms of its own? A company that offers trips to Mars? These companies once seemed crazy but now investors all over the world are fighting to be part of them. Have we all gone mad? Maybe not. Unicorn companies are different and they play by different rules. 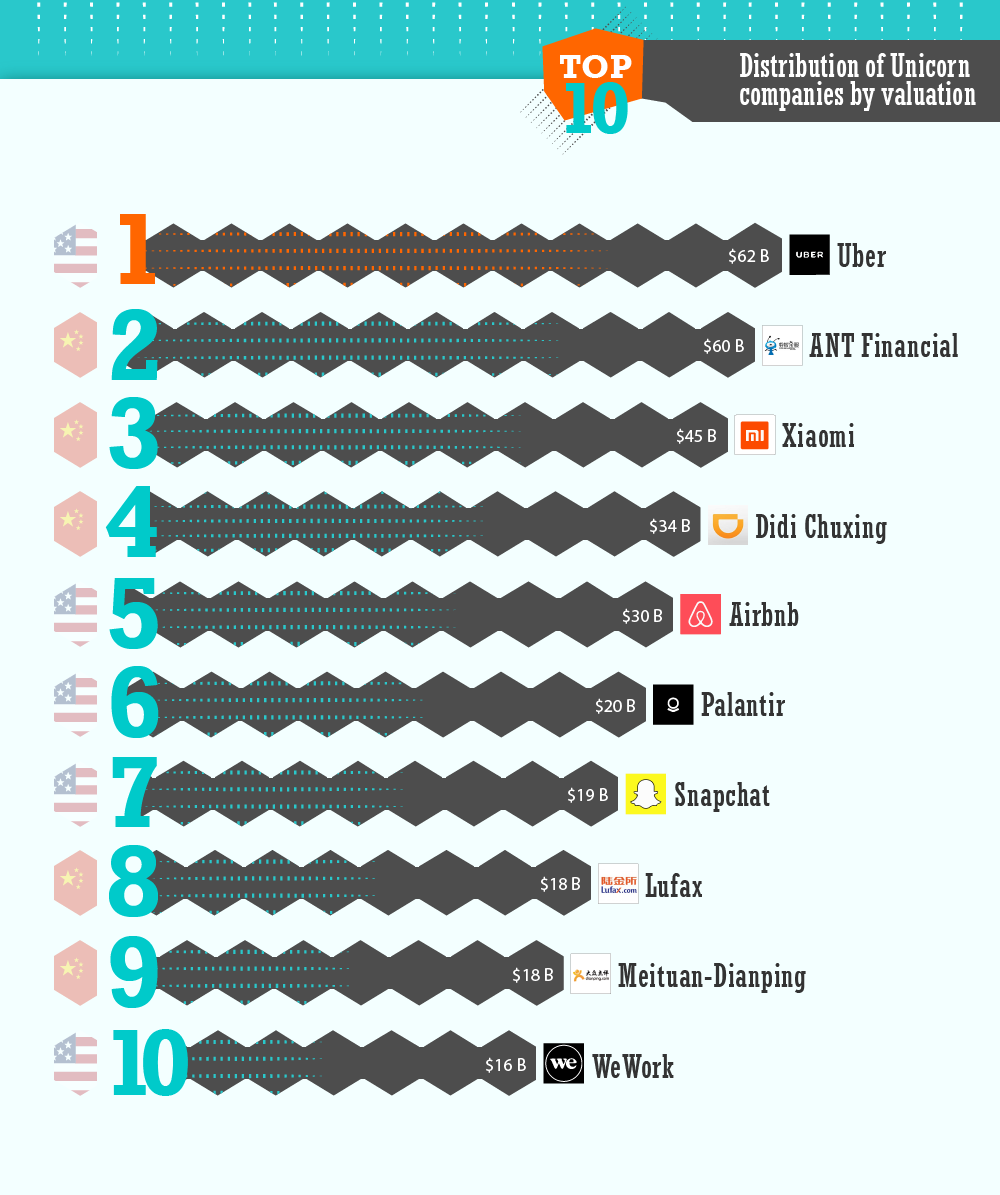 The ranking of Unicorn Companies can change at the speed of light and this offers the possibility that new candidates can suddenly emerge and become the new jewel in the crown.

According to the latest up to date valuations on which our infographics are based, the top 10 companies that sweep the board are from The United States and China. Interestingly there are 5 from each country, which is understandable when you consider the following:

The current top 10 unicorn companies are made up of the following brands:

Where are the unicorns? 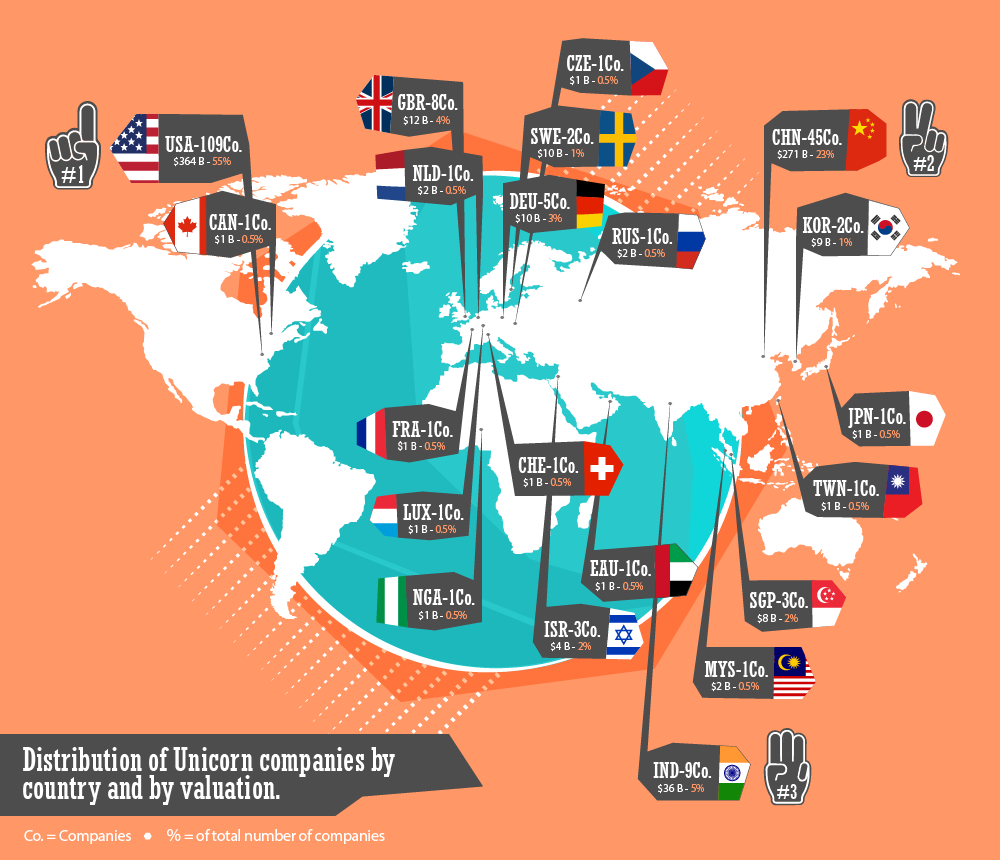 Aren’t there any unicorns in Africa or Latin America? Unfortunately, a difficult combination of elements is needed to be able to set up unicorns: technological development + lots of money. That is why; we find most of the unicorn companies, of the 200 analysed, spread out over just 3 continents: 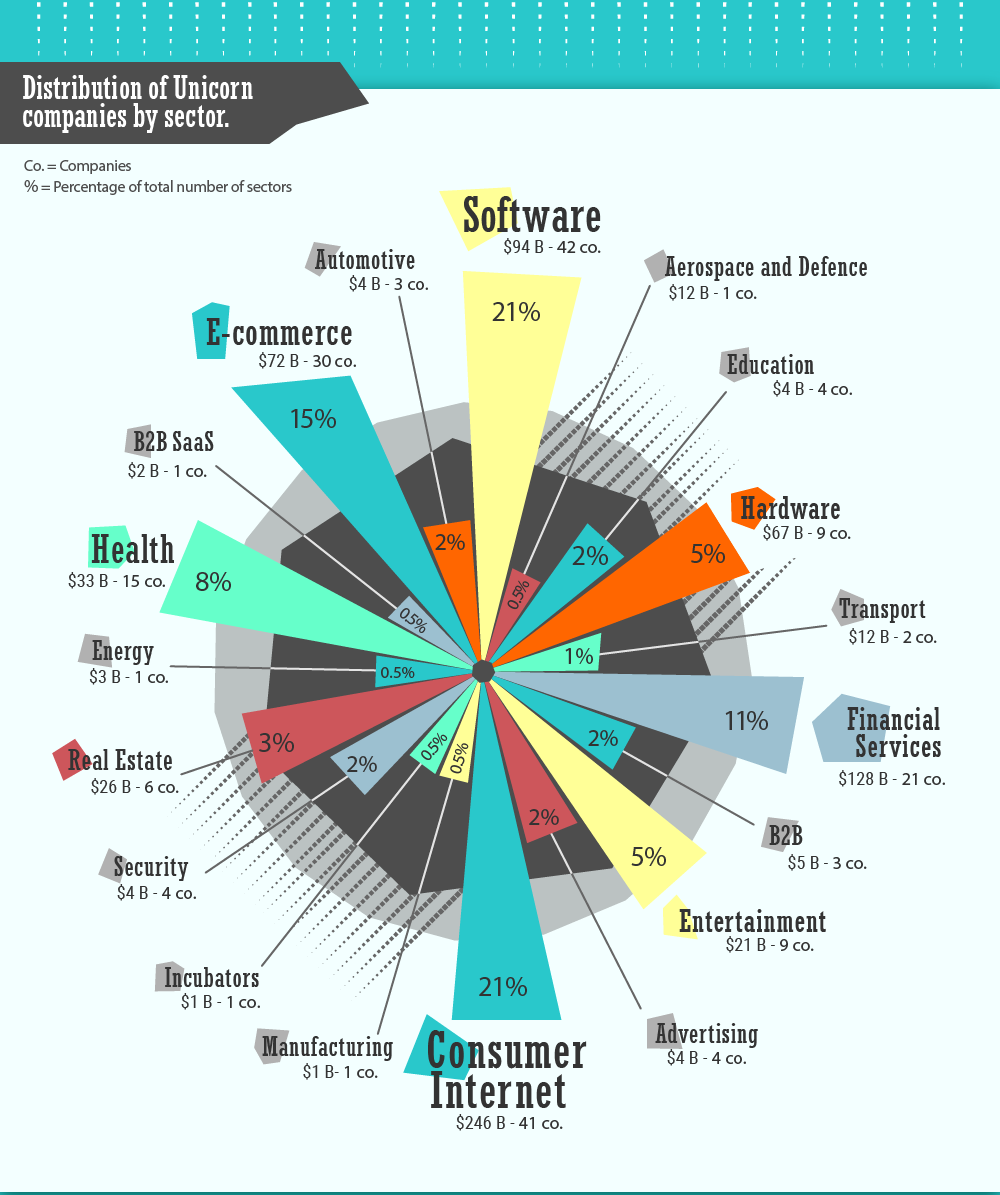 A common error is to think that Start-ups that are valued at more than a billion dollars are only focused around the field of technology. It is true though that the 3 main sectors are:

As you can see from the infographic, you can find unicorn companies in many other sectors, such as:

Show me the money! 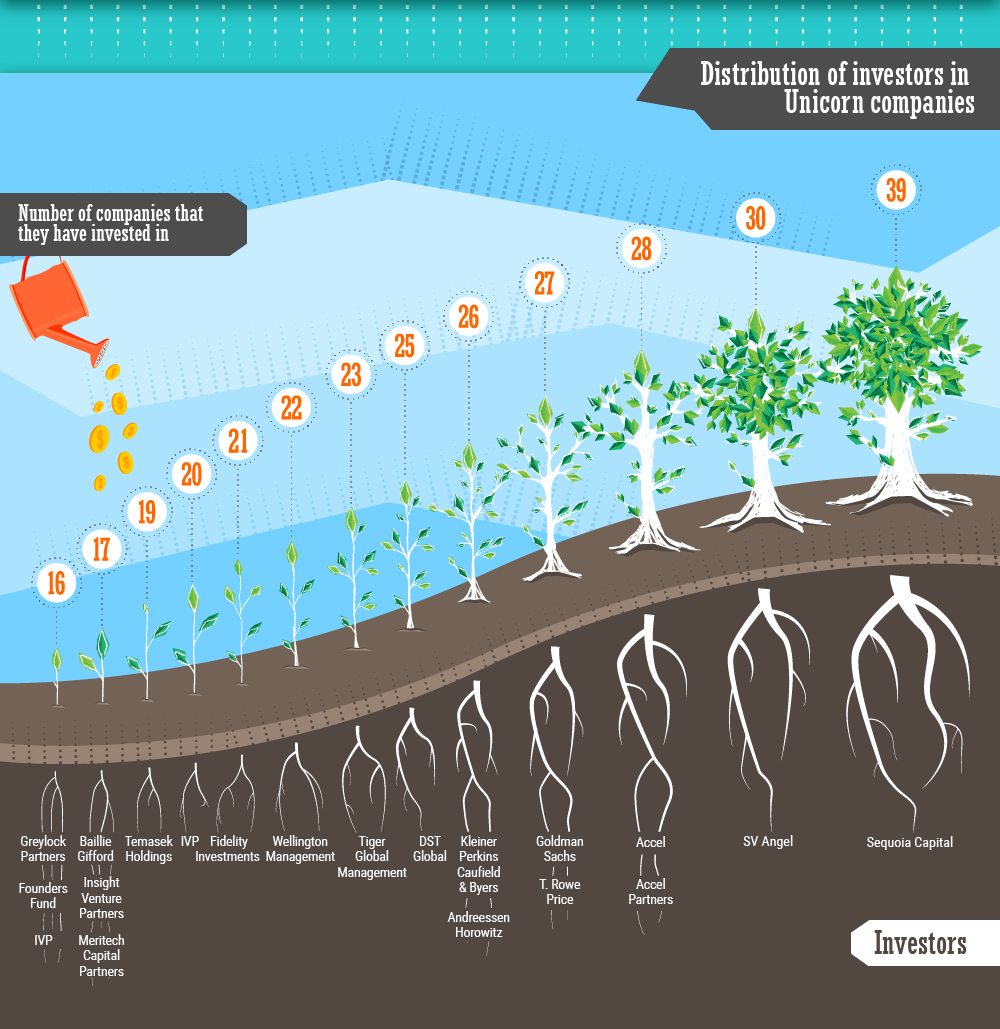 Without money there wouldn’t be any unicorns. It is essential to know who is behind these companies and who are bailing out the start-ups that are losing money in order to keep them afloat. Why do they do it? The end result is basically to get a big piece of the cake to share in the coming years.

The main 10 capital risk companies that bet on unicorn companies are:

Unicorn companies by year of foundation

Unicorns are young, but not as young as you might imagine, as you can see from our graphic. A little over a quarter of the 200 companies, 55, are less than 5 years old and 13 of them are well established.

It seems that the best years to found unicorn companies are gone. The best years were actually between 2006 and 2012, right in the middle of the global crisis. Maybe that situation was what helped these types of companies to appear, because they questioned absolutely everything in a moment when everything seemed to be lost.

The number of unicorns founded during these years were:

Check out the information in the following infographics: